As Floridians have pondered the large “cone of uncertainty” Tropical Storm Issac produced in models of the projected path, I’ve taken note of a term that applies to more than a few business plans. Cone of uncertainty – what a loaded concept. 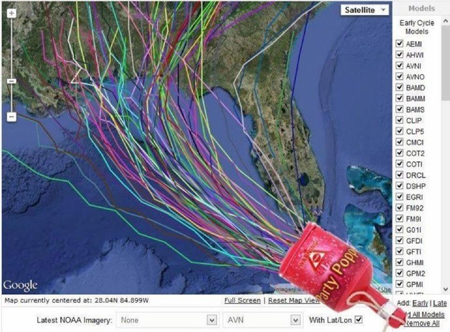 When it comes to business strategies & storms, I think you should expect the best, prepare for the worst, make a plan and proceed confidently, at the same time knowing that you can’t fall in love with the plan because it might have to change.   It could be that weathering dozens and dozens of hurricanes as a native Floridian has influenced my way of thinking.

Entrepreneurial thinkers tend to be action-oriented optimists. Even our memories are colored with optimism.  I have vague recollections of seeing a tornado in the sky and running for cover as we had tentatively stepped outside in a break in the fury of one particular hurricane.  I also remember huddling in a closet in a middle bedroom with my family during one especially crazy hurricane. But mostly I remember the joy and fun of “hurricane days” off from school, giving us time to play in streets that had become rivers. Undoubtedly, not the same memories those in charge recall.

Weather forecasters and economic forecasters have a lot in common;  it’s hard to predict something you can’t control and a lot of people are looking to them for direction.  Business  leaders are economic forecasters in their sphere of influence and also know that their decisions can affect many. We  gather  data and make a plan but inevitably there are factors that can’t be controlled. Nonetheless, somebody has to be decisive. Someone has to get things moving.  That’s part of the bravery of leadership and part of the courage to stay the course when critics are quick to let us know when we get it wrong. And we do get it wrong at times. That’s part of being in the middle of the action.

My 5-step process for leadership in changing times:

2) Prepare for the worst

5) Go with the flow (In other words, don’t fall in love with the plan because you might have to change it.)

That’s the way the wind is blowing around here as we make plans. Then change them.