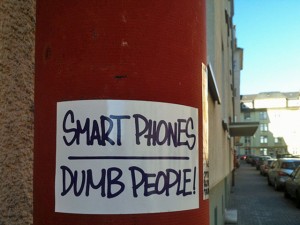 When was the last time you were annoyed by someone being inconsiderate with their cell phone?

Apparently, I was the guilty party the other day. I was driving in light traffic and took a call. A moment later, a guy pulled up next to me, honking and gesturing wildly. As I tried to figure out what his emergency was, I realized he was cursing and yelling at me to get off my cell phone. Seems to me he was a much bigger hazard than I ever thought about being.

Smartphones don’t necessarily make us smart. Imagine if a course on cellphone etiquette was a requirement in purchasing a device. Or what if it became a required course in school?  Maybe people would act smarter.  Since consideration isn’t a function of IQ – it’s more a function of EQ (Emotional Quotient) – I’m not sure that’s the answer.

Smartphones: A Call for Common Sense

According to a 2013 Internet Trends report, we unlock our phones anywhere between 110 and 150 times every day.

Harris Interactive conducted an online survey of more than 1,100 U.S. adults in June, 2013, and the results were a startling reminder of just how tethered to technology we’ve become.

Two-thirds of smartphone owners say they could not “live without” their devices.

33 percent of adults use them while on dinner dates.

35 percent use them while at the movies.

12 percent of people reported that they feel that their smartphone gets in the way of their relationship.

The trending YouTube clip called “Look Up“, carries a strong message about the tremendous trade-off between “being connected” through our devices to the point of sacrificing the relationships right in front of us.

The lesson of  “Look Up” applies to business communications as well.  My Pinterest Boards are rather full, but one of the top pins, shared constantly, reads, “Social media and technology are not agents of change. We the connected people are the agents of change.”

Let common sense and common courtesy rule over the need to check your device.

3 Ways to Get Smart

Apply these three ideas for three weeks and note the way your relationships benefit:

1. Be fully present. Give the people you are with the gift of your attention. Even if it’s the cashier at the grocery store or the teller at the bank. Those working in the service industry are not invisible people and don’t deserve to be treated as such. And if that’s true, how much more do your family and friends deserve your attention?

2. Keep your calls private. If you must take a call while in the presence of others, step away and keep your voice down. It’s so easy to fall into a habit of “cell yell”; often caused by the competing noise in the many places we carry on conversations.

3. Be intentional instead of indiscriminate about your smartphone use. Set boundaries for yourself that are reasonable and do-able to quit being a slave to technology. Technology is a servant. Be a good master. For example, if you are guilty of checking your email while driving, stop. (Your life is actually on the line- that’s why there are so many laws pertaining to distracted driving.) If you have to put your phone out of reach while you develop a new habit, so be it.

Outsmart your smartphone with the timeless tools of consideration and commonsense.

“Success is a few simple disciplines, practiced every day; while failure is simply a few errors in judgment, repeated every day.”  Jim Rohn