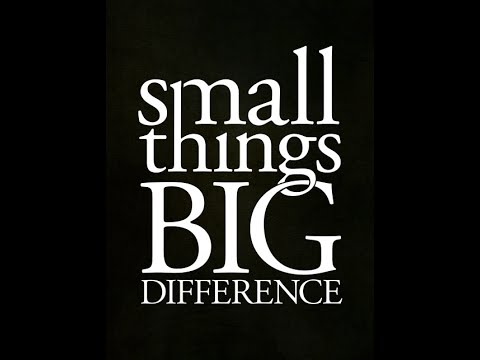 Just change one little letter in a word and the meaning is completely changed.  The English alphabet contains twenty-six letters and with that, we have somewhere between a quarter of a million and one million words currently in use. New words are added to the language constantly and unused words are “retired”, yet not one new letter has been introduced to the alphabet. Simple changes can bring redefinition.

A memorable story about the power of small things comes from a trip to Europe years ago. I was treated like a first class passenger but I was flying economy. I had flown many times but never had such a positive experience, so I went on the hunt to discover the story behind this. It wasn’t just a kind flight attendant, a clean aircraft or good food. It was a myriad of details that were all done well.

The airline was  SAS, now known as Scandinavian Airlines.  A new CEO had stepped in to remedy an ailing company. After a phenomenal turn-around from an airline with one of the worst ratings in the world to one of the best, he was quoted as saying, “I didn’t set out to make any one thing 100% better, but instead to make everything 1% better.”  A spirit of excellence is part of stellar leadership. And excellence comes from doing a lot of little things well.

Customer service is the lifeblood of a successful business. And often, it is the little things that make a big difference.

A thought leader I learn a lot from is John Spence, author of Awesomely Simple . In a recent blog, he shares a formula for sales success:

John’s wise advice is,  “Be extremely good at what you do, genuinely care about your customer, be incredibly curious about how you can help them, and always tell them the truth.”

People skills are something no computer can imitate or duplicate. Your core strength is how much you care and how you express that, one small deed at a time.

Never underestimate the power of small things.  It’s easy to be so focused on trying to accomplish something big, that we miss the daily opportunities to do the little things that can make all the difference.