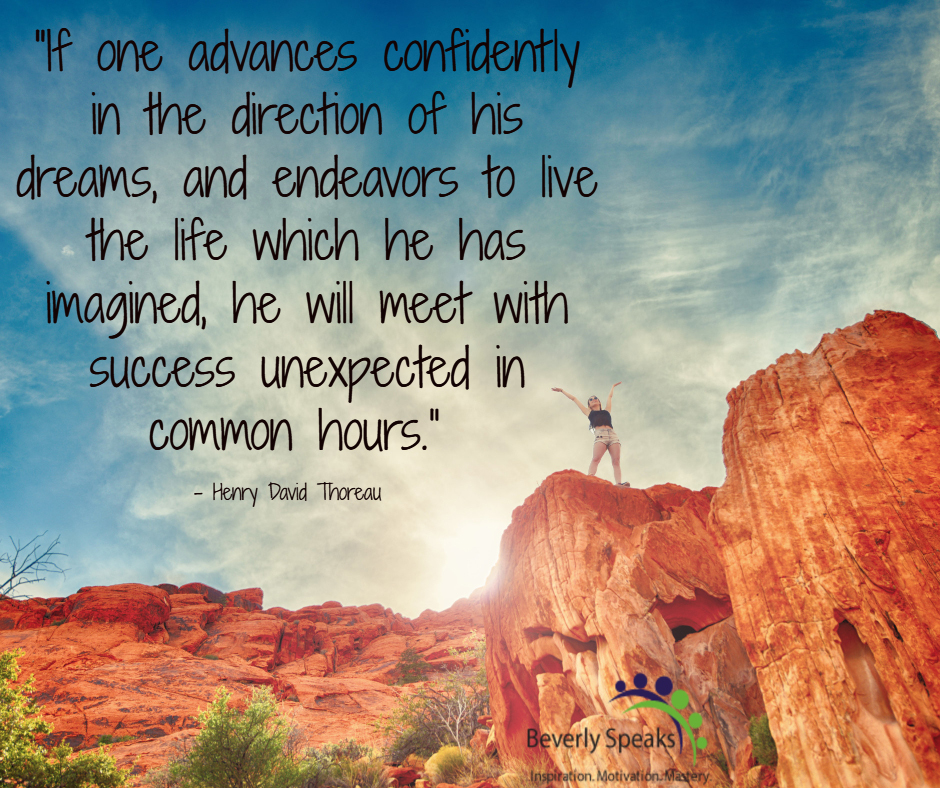 The winter fog has been thick this week, stymieing ships in our local port and causing numerous accidents on the road. It’s unnerving to drive when you can’t see where you’re going.  I approached a highway intersection this week where the normal speed is 55 mph.  I was creeping along at 30 mph because I couldn’t even make out the traffic light until I was right under it.

Life can fog up our ability to see possibilities. We can become mired in the mundane, frustrated by delays, and discouraged with our progress. What began as a quest for your destiny can become a half-hearted attempt to camp in a place you were never meant to stay. You settle. You start to see the enormity of the obstacles instead of the thrill of possibilities.

Vision stirs hope. And hope is the activator for living a life of significance.

The distinguishing feature of all great leaders throughout history has been that they inspire hope. They leave a trail of energy and encouragement wherever they go. One author calls this invaluable characteristic the “Hope Quotient.” One specific way you can become a leader who exudes hope is to have a clearly communicated vision. Hope is defined as “a feeling of expectation and desire for a certain thing to happen.”

Some wise person once said that we can live about forty days without food, about three days without water, about eight minutes without air—but not a single second without hope. If you start to think about your hopes and dreams as much as you think about your next meal, you will notice a startling change in your level of accomplishment as well as your level of optimism and happiness.

Visionary leadership doesn’t mean you have diagrams, flowcharts, procedural checkpoints, and statistical analyses at your fingertips. It is the ability to see people, places and things not as they are, but as they might become. It’s about envisioning possibilities. In a world mired in fear, bickering, mistrust, indecision, and accusations, we have to work hard to see beyond the realities that darken our view of the future.

Creating a vision board is a tangible way to stir up hope. There’s something miraculous – yet scientific – that takes place when we articulate our aspirations and put them in a form where we can see them often. One study, by Christopher Davoli and Richard Abrams from Washington University in St. Louis, published in Psychological Science, concluded that “The imagination has the extraordinary capacity to shape reality.” Research published by psychiatrist and psychoanalyst Norman Doidge, M.D. in The Brain That Changes Itself, indicates the power of imagination is nothing short of astonishing. We are wired to think in images. Image is the root word of imagination. Doors to a fulfilling life can be unlocked with the keys created by a clear vision.

Our vision, and thus our expectations, are either based on memory or imagination. Children live into the future because there’s so much more before them than behind them. That’s why they are naturally full of zeal and optimism. For them, the pull of the future is stronger than the entanglements of the past. Then we grow up. Living out of memory can either serve you well or bury you alive – depending on whether they are empowering or debilitating. But everyone, regardless of their past experiences, has the creative ability to design the future.

If you limit your choices for the future to what seems realistic or practical, you disconnect from what you truly want, and all that is left is compromise. What began as a quest for your destiny can become a half-hearted attempt to camp in a place you were never meant to stay. You settle. You start to see the enormity of the obstacles instead of the thrill of possibilities. In order to break through the habit of limited thinking, you have to stretch your mind by drawing vivid pictures. There’s a proverb that says, “For as he thinketh in his heart, so is he.” Every thought you think and every word you speak is creating your future. That’s both a responsibility and a challenge. Dare to up your game.

Commit to casting a vision so compelling, the individuals you lead can’t help but be filled with expectation, motivation, and hope.