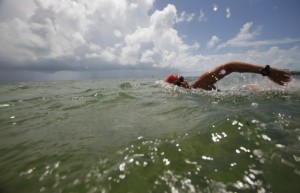 I watched with interest the recent attempt by 49-year-old grandmother, Penny Palfrey, to swim from Cuba to Florida without a shark cage. Her effort was not completed as she was scuttled by the tricky currents of the Florida Straits. Palfrey was pulled from the water 26 miles from her goal after 41 hours in the water – enduring painful jellyfish stings and visits from hammerhead sharks. The record books are still waiting for the first woman to accomplish this 100 mile swim – a remarkable test of endurance.

It made me think about a story I heard years ago that has always served to spur me on and remind me to think carefully before giving up on a goal.

Florence Chadwick was an open-water endurance swimmer. In her sport, swimming the English Channel was quite an accomplishment; equivalent to the feat of summiting Mount Everest for a mountain climber. Florence had not only successfully swam the English Channel (about 20 miles in frigid water), but she’d successfully navigated the Channel in both directions. Next, she set her sights on becoming the first woman to swim from Catalina Island to the coast of California. Her attempt began on July 4, 1952 in a dense fog. The water was freezing cold and shark-infested. After 16 hours of swimming in the frigid water, she was pulled into the boat only a half-mile from shore. Even though her trainer was in the accompanying boat shouting encouragement to her, it was the fog that deterred her. She was utterly exhausted and couldn’t see her goal. The fog had completely obscured her vision.

As important as perseverance is, I’ve found there are times when it’s necessary to reassess a situation and make a weighty decision whether to continue. Those kind of decisions need to be made after consulting with your A-team and looking at the facts. It’s when you quit out of raw emotion and fatigue that it can be excruciating and costly.

When I get fatigued, I always see Florence Chadwick in my mind’s eye. My biggest victory could just be a half-mile ahead. I’m pressing on to the goal – how about you?