What’s the magic that causes a tweet, YouTube video or ad campaign to go viral? Awe-inspiring content, hilarity and controversy all rank high on the reasons why people share. In other words, things that provoke an emotional reaction.

Mark Hachman cites a study by two Wharton assistant professors suggesting that “readers value and share hope and awe, but they’ll share content that makes then anxious and angry as well.” The study examined more than 7,000 New York Times articles over a 3 month period to see why they made the “most-shared” list.

This spring, Kony 2012, went viral as people reacted to the story of the Invisible Children of Rwanda. A perfect example of a campaign that evoked anger as the public became aware of atrocities in a war-torn land.

On the other end of the spectrum is content that bring laughs, like the Evian babies with YouTube clips that have upwards of 57 million views. Or the campaigns that inspire, like the infographic below from the Holstee clothing and accessory company that’s been circulating for years.  It’s still worth sharing.  I am more inclined to post content that inspires awe vs. angst, but as the manifesto below says, “open your mind, arms and heart to new things and people; we are united in our differences.” Pass it on. 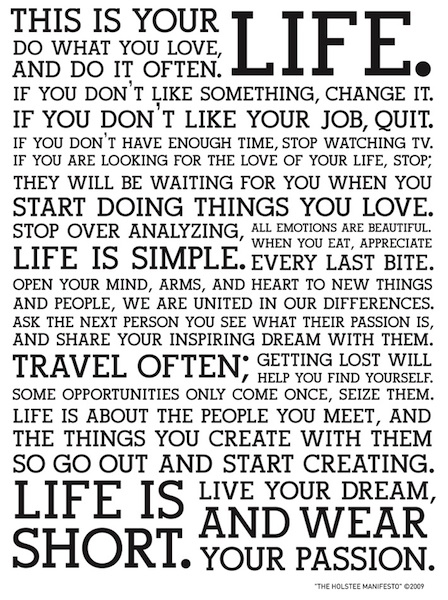