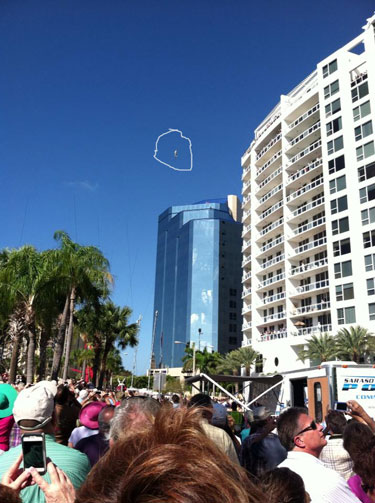 Nik Wallenda demonstrated and defined those words as I watched him walk a tight wire, 180 feet high, in downtown Sarasota recently. No safety harness – no net. The only options: do or die. As a spectator, I was nervous. I truly can’t imagine what was going through his mind.

I wonder if he allowed himself to think about the fact that his father died walking a wire in Puerto Rico while carrying on the family calling to be the best high-wire performers in the world.  I doubt if he could afford those thoughts.  It looks like “The Flying Wallendas” have learned to face fear and do it anyway.  That kind of living comes at a cost.

The closest many people come to the word “resolute” is when they think about making New Year Resolutions. But ever since watching Nik on the high wire, I’ve been pondering that word.

I’ve considered the preparation invested in performing a gaspingly-difficult feat with grace and ease. I’ve thought about the absolute focus required to be the best. I’ve pondered  my “Four P’s” of success: Passion, Purpose, Preparation and Prayer. (I’m thinking Nik took time for prayer that day!) All are vital ingredients in the process of building a legacy – a life that makes a difference.

Some people might think Nik Wallenda is crazy. There’s nothing wrong with being a little crazy. It brings to mind Steve Jobs’ words about the crazy ones…

“Here’s to the crazy ones, the misfits, the rebels, the troublemakers, the round pegs in the square holes… the ones who see things differently — they’re not fond of rules… You can quote them, disagree with them, glorify or vilify them, but the only thing you can’t do is ignore them because they change things… they push the human race forward, and while some may see them as the crazy ones, we see genius, because the ones who are crazy enough to think that they can change the world, are the ones who do.”

The world will be watching Nik Wallenda this summer when he walks a high wire across the Grand Canyon. I was advised years ago by my wise father to learn from those who are the best at what they do, no matter the industry. That’s one of the reasons I’m fascinated by the Wallendas. (If you want to experience his walk via the camera on his balancing pole, check this out. Be prepared for an accelerated heart beat.) Here’s to the crazy ones. I think I may be one – what about you?