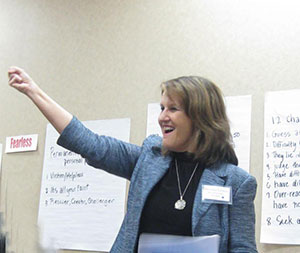 I’d bet that each of us would come up with a different list of adjectives to define what leadership means to us. Leadership is both personal and universal and looks different in each of us.

I’ve spent much of my life leading, as you probably have.  I’m not given to over-analyzing things, so I’ve  probably taken for granted the legacy of leadership I inherited and is undoubtedly written in my DNA.

Reading the startling facts in Sheryl Sandberg’s bestseller, “Lean In”, provokes some hard questions about what leadership looks like for women.  And since I’m a natural optimist, these statistics are a jolting reality check:

And this is a full century after women got the right to vote.

Why do you suppose this is?

Is this the way it’s supposed to be?

Sandberg tells the story of spending time with Leymah Gbowee, the 2011 Nobel Peace Prize Winner who helped lead the women’s protests that helped oust Liberia’s dictator. When asked how American women could help those who experienced the horrors and mass rapes of war in places like Liberia, her reply was, “More women in power.”

Undoubtedly, that would be a game-changer. So how do we get from here to there?

Sandberg’s TEDTalk of 2010 and subsequent book provoke me to think.

It’s clear to me that we may have come a long way, but we have a long way to go. The world is in dire need of statesmen and women and leaders in every area of culture that are full of honor and vision. I believe that it’s going to take a supernatural upgrade in our thinking.

Sometimes, we can’t lay hold of the new when the old ways are working.  Therefore, we are positioned for change.  What if you – personally – received fresh revelation about the possibilities ahead? What if we began to experience a deep unity between men and women and worked together instead of sniping at one another? (And this starts at home with our spouses – ouch.)

It’s clear that women are not making the headway in traditional leadership positions in business and politics that one would expect.  So it is revealing that Barna research conducted in 2012 on “What Women Think of Faith, Leadership and Their Role in the Church”, reports that the vast majority of Christian women (73%) express satisfaction with their church’s opportunities for leadership. With all due respect to Mr. Barna, I have questions about how much weight this carries in describing the American church which is rather “women centric”. But I digress.

When it comes to impact and influence on a global scale, I have a lot of questions…

“Am I living in such a way that I am modeling the way to a better future for my daughters and granddaughters?
What needs changing?
What needs to shift?
What can I learn?
What can I do?”

“Judge a man by his questions rather than his answers.” – Voltaire

It brings me joy to share from my experience what DOES work in being a strong woman of faith and action.  Let’s have lunch. Let’s get better. Join me on July 23rd for a Lunch and Learn Session: Strong Women: Lead Well, Love Well, Live Well .