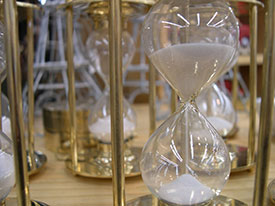 “There never seems to be enough time
To do the things you want to do
Once you find them...”
from  Time in a Bottle by Jim Croce

Welcome to the second half of the year. In football, teams use halftime to get their second wind, learn from the mistakes of the first half, strategize and prepare to win big.

Starting the second half in a holiday week in the midst of summer may be a little distracting, so I’m going to view it as halftime. It’s a great week to look at what’s working and what’s not, make course corrections and strategize.

During my Sunday evening board meeting (I meet with the CEO to plan the week *grin*), I was disgruntled that I hadn’t accomplished as much as I intended over the weekend. I was reminded of Hofstadter’s law, that states that any task you’re planning to complete will always take longer than expected. This “planning fallacy” is a strange kind of delusion that is well documented by psychologists.

Instead of being frustrated by this phenomenon, it’s more productive to be thankful to be in the company of brilliant people like Oxford University blogger Eliezer Yudkowsky who writes, “The unlikely trick is to plan in less detail: avoid considering the specifics and simply ask yourself how long it’s taken to do roughly similar things before. You’ll get back an answer that sounds hideously long, and clearly reflects no understanding of the special reasons why this task will take less time,” he writes. “This answer is true. Deal with it.”

The long 4th of July weekend was the halftime show. Now it’s game time.  Play hard – the best is yet to come!