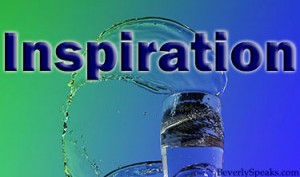 What inspires you? Identifying the often indefinable magic that reaches into the depths of your emotions and motivations to move you to action is invaluable but sometimes elusive.

This week, while seeking inspiration (and time) to write, I laughed when I read Jack London’s words, “You can’t wait for inspiration. You have to go after it with a club.”

I wish that were true. I picture a Neanderthal heading out of a cave armed with a club to hunt down dinner. Really primitive and altogether violent. Maybe that’s London’s style for finding inspiration, but it doesn’t work for me.

I think of finding inspiration like swimming in a river.  You might happen upon a tributary in an unexpected place or you may have to intentionally designate time to find it. Either way, you have to have to have a dip in the waters of inspiration.

Why is inspiration so critical to success – whether it’s in relationships, social media, speaking, writing, business development or any endeavor?

The dictionary defines inspiration as the “stimulation or arousal of the mind,  feelings, etc, to special or unusual activity or creativity.”  Digging deeper, it’s interesting that the origin and history of the word go back to fourteenth century Latin when it meant “immediate influence of God or a god,” meaning “ inflame, blow into,” from in-“in” + spirare “to breathe“.  I like to consider that inspiration is a spark of the divine that propels us into our destiny. That could explain why when we stay ridiculously busy – running from one task to the next – we tend to wear down. So let’s go to the waters….

It’s been raining like crazy for over a month in North Florida, resulting in flooding in places that have never flooded before. If you’ve ever driven in a flooded area, you know the warnings about the power of moving water. Cars and trucks can get swept away by water that doesn’t appear to be very deep. The flow can pick up a vehicle that weighs more than a ton and move it like so much flotsam. There’s always a parallel between physical laws and spiritual truths.

Need inspiration? Get in the water. 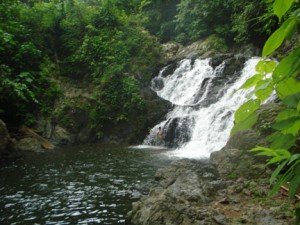 Ezekiel 47 in the Old Testament speaks of the water coming from the threshold of the temple in the city of God that becomes ankle deep, then knee deep, then deep enough to swim in.  Brings to mind a song by Steven Curtis Chapman called “Dive”.

So I’m tossing the idea of hunting down inspiration with a club and I’m going swimming. I’m diving in. In that mighty river, I  find the supernatural power that enables me to reach the unreachable.

The cleansing waters have the power to wash away the dust of disappointment, sweep away the weight of self-condemnation – revive, refresh and give freedom and joy. Never underestimate the power of moving water. 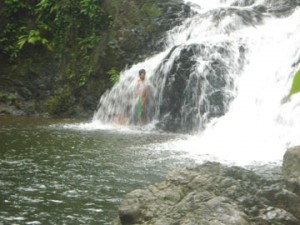 P.S. I snapped these pictures on a swimming break in a river in Central America while at the Rainforest Business Institute. What a way to learn! I get re-inspired just looking at the pictures.  So how do YOU find inspiration??