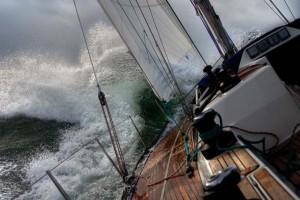 How do you handle change? Do you embrace it? Resist it? Raise the sails and go with it? Maybe your personality has a five word policy for change: “Resist it at all costs.” Only problem is – that doesn’t work.

Successfully navigating change is a prized skill in business and in life. For those willing to set out into uncharted waters with a compass and a sense of adventure, there can be rich rewards. Of course, there’s also risk.

Either way,  it’s dangerous business to hang on to the status quo. Experienced boaters know that one way to navigate a storm is to raise the anchor and run with the wind. I recall with sorrow the story of three young men that died off the coast of Florida several years ago when they were unable to free their anchor when a storm came up. Their boat capsized  and there was only one survivor of the fateful fishing trip.

How many businesses have gone under by failing to negotiate storms with fast action and good decisions? Sometimes, none of the options are appealing. So we try to hold on to the familiar.

I must confess, sometimes I have a love/hate relationship with change. I’m visionary and love adventure. But I’ve been know to  hold onto a model of something that was no longer working.  It’s hard to leave the known for the unknown.  It’s like having to make the decision to quit hanging onto a capsized boat and swim for shore. You can’t haul the boat with you as you swim. It’s one or the other; stay or go for it. Not a decision to be made lightly. (And one I hope to never have to make!)

Most people are creatures of habit. We can nod our heads and give mental assent to the statement, “everything you want is just outside your comfort zone.” But when it becomes personal, and it’s our own comfort zone that gets rocked, our emotions get involved. Fear of the unknown is stirred up and that can provoke worry and anxiety.

Psychology 101 held the lesson that our emotions aren’t logical. They are based on perception rather than fact. One of the ways to move through change with grace and ease is to acknowledge your emotions and consciously adjust your perception of what lies ahead. Fears tend to grow like mold in the dark but are purified and burned up when subjected to strong light.

Navigating change involves watching the prevailing wind and becoming proactive in responding to the shift instead of simply reacting.  The clip below talks about a prevalent problem when confronting change. It’s critical to have a plan when setting out to accomplish something. We should make a plan and follow the plan, but when we fall in love with the plan to the extent we won’t abandon it when it is no longer working – that can be a killer.

The size of the craft doesn’t determine who survives when the winds blow and the waves rage.  Victory is determined by the actions of the captain. That’s you! Take the helm. There’s a lot at stake.

The Winds of Change