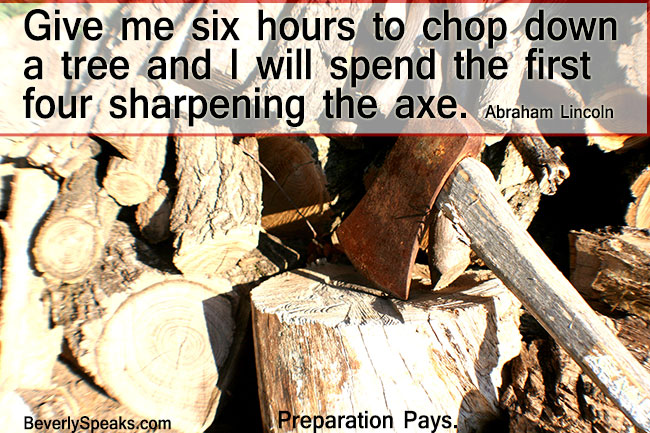 You’ve probably heard the story of the trajectory of Abraham Lincoln on his journey to become the 16th President of the United States. Except it was more of a roller coaster than a trajectory – one with a lot of mechanical problems to boot. He is quoted as saying, “I will prepare and some day my chance will come.”

Amazing, isn’t it? Most people would have quit somewhere along the way in that 28 year journey. Lincoln is in the history books for many things, including his comment, “I have a congenital aversion to failure”. We can only speculate if that was a key belief that spurred him on; a deep faith that he was destined to help shape a nation.

Whatever your goals and aspirations, the preparation will most likely take far longer than you expected and require more persistence than you ever dreamed. And I’m an optimist.

Clearly, I’m not alone in my thoughts on this. Here are some additional insights on preparation and persistence from the Presidential Hall of Fame:

“Nothing in the world can take the place of persistence. Talent will not; nothing is more common than unsuccessful men with talent. Genius will not; unrewarded genius is almost a proverb. Education will not; the world is full of educated derelicts. Persistence and determination are omnipotent. The slogan ‘press on’ has solved and always will solve the problems of the human race.” ~ Calvin Coolidge, 30th president of the United States

“Genius is divine perseverance. Genius I cannot claim nor even extra brightness but perseverance all can have.” — Woodrow Wilson, 28th president of the United States

“Always bear in mind that your own resolution to succeed, is more important than any other one thing.” — Abraham Lincoln,  16th president of the United States