When I was a kid, I loved a game show Monty Hall hosted called “Let’s Make a Deal.” There were always 3 curtains (or doors) to choose from and if you picked the right one, you won something awesome like a new car. The wrong door held dud prizes, like a donkey. 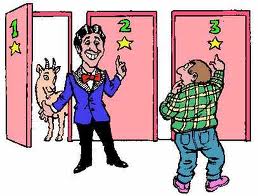 How many of you have ever chosen the wrong door?  Yeah, me too.  We’ve all made some choices that didn’t work out. I can give you the positive spin that there’s no such thing as failure – only outcomes. And if it didn’t come out the way you wanted, you can go at it again. The spin doesn’t erase the internal damage that takes place.  Shame, hurt, disappointment and disillusionment can take up residence in our minds and hearts.

The aftermath can be far worse than the event.  As a native Floridian, I’ve seen a good number of hurricanes. Just a few years ago, a rather minor hurricane made landfall more than a hundred miles west of us.  The storm surge took out the foundation of a family beach home. It had weathered  much bigger storms, but the house was a total loss from this small storm because the waves undermined the very foundation. That’s exactly what disappointment can do in our lives.

In a recent study by Mike Morrison of the University of Illinois and Neal J. Roese of Northwestern, 370 Americans were interviewed about their lives’ deepest regrets. Here are some key points:

• “Lost loves and unfulfilling relationships turned out to be the most common regrets,” though women had far more romantic regrets than men. Family matters were the second greatest source of regret.

• Men were more likely to have work-related (career, education) regrets than women. And in an interesting paradox, “Americans with high levels of education had the most career-related regrets.” In other words, more options seemed to correlate with more regrets.

• Overall, there wasn’t a difference between regrets over actions taken versus actions not taken. Prior research had shown that regrets focusing on action were more common than those focusing on inaction. But people regretted inaction far longer than actions.

Regret management is a psychological concept that means leaving the past where it belongs -behind us. We can learn from it and ultimately have to forgive ourselves in order to move forward. Often, that’s easier said than done, because of the emotional tentacles that have to be unwrapped from our hearts. This is a non-elective surgery if you want to be free to move forward with hope and expectancy.

So let’s make a deal. Let’s talk about how you can leave the past where it belongs and move boldly into a future filled with success that’s beyond what you’ve dared to hope for in quite some time. But you’re going to have to trade your disappoint for….your destiny.

2 thoughts on “Beyond Disappointment”