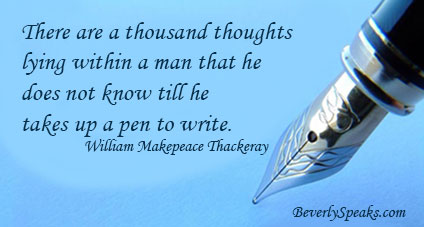 Creativity Bleeds from the Pen of Inspiration

My brain works better with a pen in my hand. I’m a happier reader when holding a bound book. And I like to write important things down on paper. You can call it old-school, but I call it neuroscience.

I’ve watched the changes in the Common Core Standards in education with alarm. Particularly the fact that new guidelines only include handwriting as part of the required curriculum in kindergarten and first grade. After that, the focus shifts to typing skills. This change is primarily in response to our technology-driven culture where keyboards are more common than pencils.

Interestingly, an abundance of research substantiates the connection between writing by hand and reading success. Virginia Berninger, a professor at the University of Washington, reported in a study of children in grades 2, 4 and 6,that children wrote more words, faster, and expressed more ideas when writing essays by hand versus with a keyboard.

In an article titled, Why Writing by Hand Could Make You Smarter , Dr. William Klemm writes, “There is a whole field of research known as “haptics,” which includes the interactions of touch, hand movements, and brain function. Cursive writing helps train the brain to integrate visual, and tactile information, and fine motor dexterity. School systems, driven by ill-informed ideologues and federal mandate, are becoming obsessed with testing knowledge at the expense of training kids to develop better capacity for acquiring knowledge.”

Now let’s talk about adults. I’m a writer. I’ve tried using my tablets and computer for writing while struggling with distraction, feeling stuck, stuttering – an altogether frustrating exercise. When I acquiesced to what I knew intuitively and returned to using my legal pad and bevy of pens, the creative flow I was having difficulty tapping was restored.

I’ve studied neurolinguistic programming and know that for many people (including me), there is a connection with the hand and the brain that isn’t activated by typing. A simple example is when I write a shopping list by hand, if I inadvertently leave it at home, I typically recall at least 99% of what was on the list. If I typed the list, I’m lucky to remember 25% of it.

In my search to see if my experience is unusual, I was quick to discover I am in good company. Author Paul Thoroux expresses, “Writing by hand is part of my creative process. The speed at which I write with a pen seems to be the speed at which my imagination finds the best forms of words.”

Most of us process what we write by hand more deeply. A 2014 study of college students who took longhand notes revealed they answered conceptual questions about the material better than students who typed their notes.

Admittedly, I love technology and all the conveniences it affords. I could even be accused of being tethered to my devices. But when it comes to creativity, there’s a time to unplug.

In the first century, Horace said, “The pen is the tongue of the mind.”  Some things remain the same.

There is power in the pen. I’ll not be found speechless. How about you?

4 thoughts on “The Power of the Pen”