The findings of a recent study by the French National Institute of Health and Medical Research
indicate the behavior of others can influence traits like laziness. Since I was a child, I’ve heard the caution, “You’re known by the company you keep”. As a teenager, I scoffed at the idiom, “birds of a feather flock together”. But it doesn’t take long to figure out you can either be around people who pull you up or drag you down. People who call out the best in you, or people who allow you to stay stuck in your worst habits and tendencies. Mindset matters.

No wonder the headline, “Why Laziness May Be Contagious” immediately brought to mind the pervasive entitlement mentality that is epidemic in our nation. After all, entitlement lives right next door to laziness. And the research published by lead author Jean Daunizeauin shows that laziness and impatience, among other things, are quite prone to the influence of others.

As a Leadership Coach and Executive Trainer, I find deep joy in rousing people to raise the bar and be their very best. It’s exasperating to try to motivate or inspire people who are content with the mediocre and mundane. An attitude of entitlement can be as subtle as the guy who sulks because he didn’t get the promotion just because he’s been there longer than the person who did. It can be as blatant as the unmotivated co-worker who mutters and complains about every decision made by upper-management, without ever making a move to help or make suggestions for improvement.

Attitudes can be changed, but the longer they’re held and the deeper they’re ingrained, the harder they are to shift. The decision to change a pattern of thinking must be internally motivated. The reality is, if you think like you’ve always thought, you’ll continue to get what you’ve got.

An entitlement mentality can be defined as a state of mind in which an individual believes that privileges are rights. It’s a mindset that finds fault, blames others, and thinks the world revolves around one’s self. It’s quite the opposite of empowerment and will never lead to excellence.

Empowerment, on the other hand, takes personal responsibility and raises the standard through practical action. Empowerment exhibits a strong work ethic and is more likely to be found reforming than conforming. Empowerment is selfless, entitlement is selfish.

If Entitlement and Empowerment had personalities and voices, this is what they would sound like:

Entitlement: “Why bother?”
Empowerment: “Let’s do this!”

Entitlement: “There’s no hope.”
Empowerment: “There are always possibilities.”

Entitlement: “I am overlooked and undervalued.”
Empowerment: “I am fortunate and can make a contribution.”

Shifting a mindset – especially of a group of people – can be somewhat like trying to whip a cruise ship in a U-turn. There’s nothing speedy about it – it has to be done incrementally.  The most effective way to begin the shift from entitlement to empowerment is by developing an attitude of gratitude. It sounds simple, but when you turn the focus to what is right with people and situations and quit talking about what’s wrong,  a paradigm starts to change. What you appreciate, appreciates. In other words, you are at risk of losing what you don’t value and celebrate.

There are those who make accusations against entire generations, saying things like, “The Millennials have such an entitlement mindset”.  (Millennials are described as those born between the early 1980s and mid 1990s.) As the mother of three hard-working, generous, and smart Millennials, I can argue entitlement is not exclusive to any particular generation. Every generation has those who choose to settle and take the road of least resistance. Entitlement vs. empowerment is not exclusive to any particular age group, race, economic class or nation. Laziness might be contagious,  but positive characteristics and leadership strengths are transmittable as well. 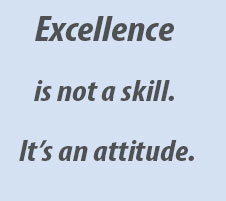 Just as a negative mindset can be contagious, a higher standard can inspire, uplift, and change the course of the future. Effective leaders are those who have chosen empowerment over entitlement. Empowered leaders are change-makers – willing to invest time, energy, and resources to bring about positive change. Excellence is not a skill. It’s an attitude – reflected by action.

It is always wise to learn from history. Moses was an empowered leader, charged with the amazing task of leading more than a million people out of slavery into freedom. They were an obstinate, whiny group – taking 40 years to complete a journey that should have taken 11 days. They were extraordinarily slow to shift their mindset and learn the lessons necessary to enter their promised land. You’ve heard the expression, “I don’t want to go around the same mountain again”. This group originated the saying. The words of Moses, recorded in the Book of Deuteronomy thousands of years ago, echo through the ages as a relevant message today. He spoke, “This day I call the heavens and the earth as witnesses against you that I have set before you life and death, blessings and curses. Now choose life, so that you and your children may live.”