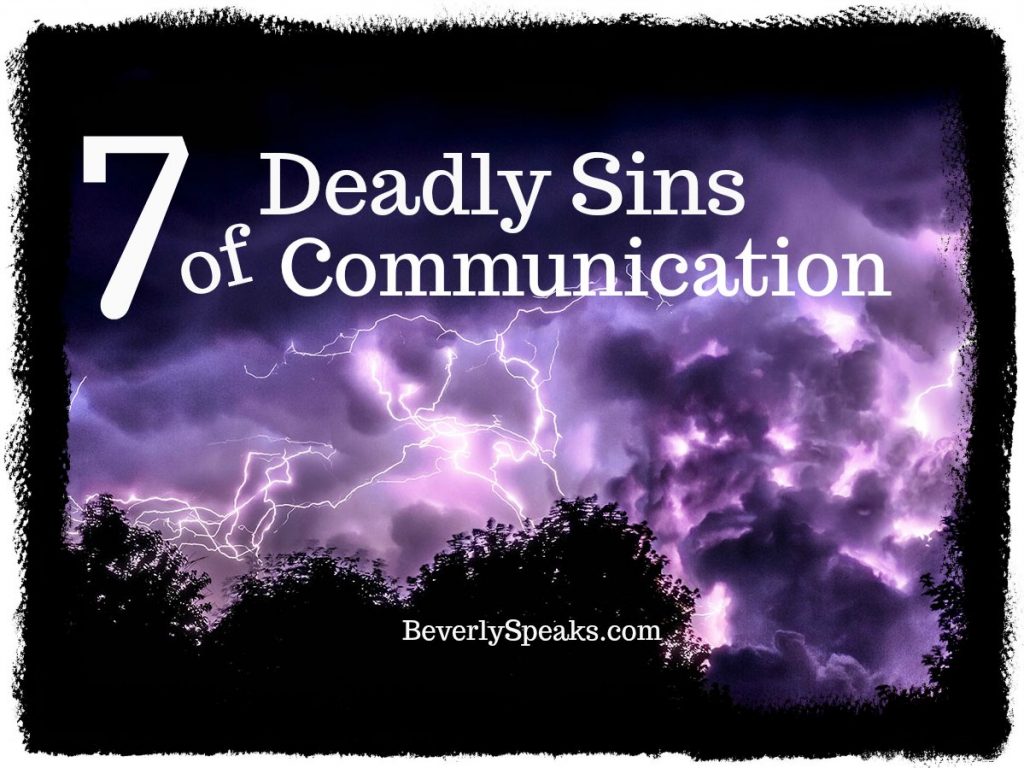 If communication is the currency of relationships, are you rich, just getting by, or bankrupt? If you are feeling short-changed, it’s time to review the seven deadly sins of communication. Regardless of your current state of affairs, with intentional investments, you can significantly increase the value of what matters most in the long run – relationships.

Research reveals that the higher your EQ, the happier your life will be.  And the Harvard Grant Study found strong relationships to be far and away the strongest predictor of life satisfaction.

Sometimes, in figuring out the right things to say and do, it’s helpful to start by taking a look at the wrong things we tend to do by default. As you begin to recognize the patterns of miscommunication, you can flip those behaviors. Neurologists have proven we can retrain our brains – as in literally change the circuitry – through developing new behaviors.

The seven deadly sins of communication are the most common pitfalls that lead to relationship stress. If not addressed, you’ll find you are killing relationships rather than building them.

1. Avoidance of Critical Conversations. The more important a relationship, the more likely we are to avoid talking about the important issues. This might be because we get caught up in the day-to-day responsibilities and deadlines and we don’t schedule time to actually sit down and talk. It could be caused by an underlying fear that things won’t go well. Thus we allow the elephant in the room to grow. It is said that difficult conversations take from 3 to 15 minutes. A limited investment of time can change everything. (Get the free guide at the end of this post for specific help in navigating difficult conversations.)

2. Ambiguity.  Don’t assume other people know what you are thinking. Clarity is priceless and begins with recognizing your own feelings and reactions. The next step is to take responsibility to communicate with the other party without placing blame. Avoid speaking in generalities about another person’s behavior; speak to direct examples and offer resolution. Don’t hint.

3. Lack of discretion & confidentiality.  Keep private issues between the people involved. Toxic offices develop when there’s too much garbage being aired. Definitely do not throw people under the bus and never vent on social media.

4. Refusing to acknowledge the power of non-verbal cues. People will often say everything’s fine when there’s every indication all is not well. Pay attention to body language – it tells the truth.

5. Volcanic emotions. Emotional outbursts indicate a lack of self-control and serve to make a situation worse rather than moving toward resolution.  This is not to say emotions shouldn’t be expressed. Emotions are good thermometers but they make terrible thermomstats. You can’t allow them to take the lead. The time to address the issue is not when emotions are running hot. Allow time to cool down and schedule a time when you can talk in privacy without interruption. Don’t yell, don’t cuss, and don’t name-call.

6. Disengagement .  Mentally and emotionally checking out can be a default response for many people. Choosing to not be fully present signals you don’t care to work on the relationship. And that can be a death knoll to communication. A natural reaction when we feel overwhelmed is to shut down. When we go into this mode of self-protection we operate with tunnel vision; meaning we fail to consider options and see possibilities.

7. The inability to recover from conflict. Ownership is the willingness to consider you could be wrong. Be the first to apologize – even if it’s just for poor communication. Don’t keep a record of wrongs. Bitterness is like swallowing poison and expecting the other person to die. Forgiveness is the reset switch.

Be determined to live above the 7 Deadly Sins of Communication. It will make you richer in all the ways that count because the most important things in life aren’t things.

The free Guide to Difficult Conversations, available below, is an actionable way to start improving relationships with good communication skills.