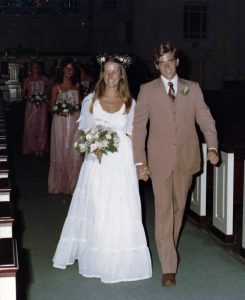 This article is published by Beauty For Ashes Press in an anthology called From Tears to Triumph: Tales of Transformation Through Jesus Christ.
In celebration of our 39th anniversary, I want to share it with you here.

It seems unreasonable to anticipate an event for years, plan and prepare for months – only to find yourself in the middle of the experience with a distinct feeling you are in over your head. That’s where I found myself 36 years ago after the wedding.

I had seen enduring marriages modeled by my parents and grandparents so I assumed I could slide easily into mine and it would all work out fine.  I discovered it’s harder than it looks and more difficult than one imagines to be married – much less live happily ever after.

Walt Disney didn’t invent fairy tales; he just expanded their reach and put them in living color in almost every home in America. The expectation of an adoring Prince Charming coming to rescue the princess is ingrained in the psyche of every little girl through the timeless tool of storytelling.  We grow up with dreams of gossamer gowns, glass slippers and a palace. Nothing in that scene prepares us for what’s real. By the time I was a teenager, I was oblivious to my own unrealistic expectation of marriage, including the idea that someone perfect was going to come along and make my dreams come true.

Like thousands of newlyweds before me, I found myself living in a new town, job-seeking and adjusting to a totally unfamiliar life.  Throw in the inevitable conflicts between two completely opposite personalities plus the neediness created by loneliness and it was tough.  Looking back, I realize I was selfish and demanding, though I certainly didn’t recognize it then. I just wanted to be happy. And I wanted my husband to actively participate in making that happen. News flash, Beverly: Even a terrific husband makes a lousy God.

Fortunately, while searching for happiness, I found God.  It happened through a group of Christian women who befriended me.  I realized my need for a counselor, teacher, friend, and Savior and invited Christ into my heart. Though I didn’t confess my struggle with learning to be a wife to my new friends, I was asked to facilitate a new Bible Study on building a Christ-centered home. I laughingly responded that I would attend but couldn’t possibly lead it.  God knew exactly what I needed, so in spite of my resistance, the group began with me leading. It seemed like a joke – I was so uncomfortable with the truths in the material, I most certainly would have quit attending had I not made a commitment. I was uncharacteristically quiet during the sessions as I learned first-hand about the conviction the Holy Spirit brings to the heart.

God began to reveal that my need to be right (and oh, how I love to be right), is a spirit of pride. And I had an unhealthy dose of it. He gently chided me that the only way I would see change in our marriage was to change the only person I was accountable for – myself.

It was fascinating to learn to discern the voice of God – He has so much to say! It’s just that He usually whispers while the world roars. One of my early lessons as a Christian was on the power of words.  A little song, based on scripture (songs are always my fastest route to memorizing Bible verses) became a favorite. “Don’t be moved by what you see, don’t be moved by what you feel, but call those things that be not as though they were”, based on Romans 4:17, ran through my mind day and night. It was a very present reminder to think about God and speak good things. I learned that God has spoken the universe into existence and then delegated to us the power to speak order into our personal world through our words.

Being made conscious of the power of my words, God began to show me how to speak words of life to my husband instead of being critical and pointing out where I thought he was falling short.  I learned that the tongue is a small part of the body but it can be like fire; a small spark can burn up a whole forest. (James 3:5-8) I’ve started more than my share of fires. If my tongue got shorter every time I’ve had to bite it, mine would be a nub! I’ve learned the hard way not to say something permanently painful just because I’m temporarily angry.

As time passed, the fact that Jim wasn’t a Christian became a real sore spot. Unfortunately, I had developed a religious attitude about this. It was yet another manifestation of pride. Since I was praying, reading my Bible, going to church and seeking wise counsel, I must be right and my husband wrong, correct? Nope – not even close. That’s not the way it works. God wants us to honor and respect our husbands.

Unfortunately, I loathed the word submission. That doesn’t sound very spiritual but it’s the truth. My half-hippie liberal minded 25-year-old self just didn’t get it. The truth is, most of Christendom doesn’t get it. We’ve got the world’s culture on one end of the spectrum shouting that a woman is self-sufficient and has all authority over her life and her body. Then, there’s the extreme religious side espousing a doctrine that depicts woman as a weak doormat. I found the truth in the Bible. The husband and wife are to submit first to God, then to one another. (Ephesians 5:21)

It was so exciting to gain an understanding of how God magnificently designed the marriage covenant relationship. Eve was taken out of the side of Adam to protect him from his aloneness. God designed woman to stand face-to-face with man and call him forth in a way no one else can. The intimacy of marriage is supposed to be the incubator for the fulfillment of our destiny. No wonder it can be so hard.

One memorable day I had a lesson on marriage while standing in church in the midst of praise and worship. Only I wasn’t worshipping. I was murmuring and complaining. I was mad. Jim and I had an argument when I was trying to get out the door with the children, since at the time, he didn’t go to church. I was sort of fussing at God, explaining to Him the unfairness of it all and telling God I just couldn’t carry on with this “love your husband” bit any longer. That’s when God interrupted me with a staggering message. He said, “I’m not asking you to love him.”  “Huh? What? Did I hear that right, God?” He replied, “I am asking you to let me love him through you.” The revelation exploded in my understanding that I am just the hose. God is the water. I left that service refreshed. What a wonderful freedom to relax in the love of God and let Him do the work with people. It was the gateway to loving others unconditionally. It transformed our home and changed my understanding of how not only to love Jim, but how to love others in my life as well.

I learned to turn to God to get my deepest needs met, not depending on my husband, my friends or anyone else. As a result, it allows my husband the freedom to love me the way only he can!

After 17 years of marriage, buckets of tears and countless prayers, my husband had a power encounter with the living God. It’s a little embarrassing to admit I had given up on seeing that. This was a lesson to me that God is always at work and always responding to our prayers, even when we can’t see anything happening. God came powerfully into Jim’s heart, setting it on fire and it has neither dimmed or flickered. Interestingly, a wise pastor cautioned me when Jim was born again that happily-ever-after had not arrived. He said we needed to be aware that the enemy of our souls would fight with every weapon available against the unstoppable power of a husband and wife who pray together in unity. It was indeed a tough year. But with God always with us in our circumstances, the outcome was sure.

A marvelous thing happens over time when you learn to treat the heart of another with love and respect. You learn to forgive an offense when no apology is offered. You learn to overlook disappointment when you don’t get your way and keep a good attitude.  You learn to “fight fair” by not accusing and blaming.  You learn to gently articulate your needs without snapping. And you don’t bring up a list of grievances when you’re upset. You address one thing at a time. Have I mastered all this? Heavens no! But I get the opportunity to start fresh every morning and walk it out. And it does become easier with time.

I’ve been able to remain teachable through the really tough lessons because of the goodness and grace of God. He loves me deeply and completely, even when I fall woefully short of His best.  The term “ragamuffin gospel” is very real to me as I look at how he wooed this ragamuffin masquerading as a self-confident woman and tamed her self-willed, rebellious heart. What is rebellion other than thinking you know best? Trying to craft your own life by doing your own thing when the Master Builder has an impeccable plan that will withstand the storms of life is sheer foolishness. Time is of the essence – I don’t want to waste it on foolishness.

Yes, there’s a Kingdom to be built. King Jesus, the Master Builder,  is with us every step of the way to give us joy and strength in the process. We get to be eyewitnesses of His glory as he patiently transforms flawed people into a spotless bride.

God’s promises are true – we can look forward to a mansion prepared for us in a city paved with streets of gold where we will live with the Prince of Peace and the King of Kings. That’s a happily-ever-after no fairy tale can touch.

6 thoughts on “After the Wedding”