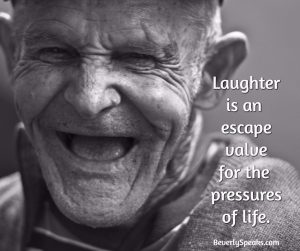 Hurricane Irma is steadily moving toward Florida as I write. I have dozens of relatives scattered across Florida – all in the path of this dangerous storm. I refuse to give in to fear so I don’t keep the television on to watch the continuous reels showing the devastation in the places Irma has hit already. As I check online periodically for updates, I inevitably end up looking at FaceBook. Yesterday, I noticed some scathing remarks about the people who were posting jokes and silly things about Hurricane Irma. I refrained from comment since I don’t find Facebook to be a place to engage in serious dialog. People become testy quickly.

Why We Laugh When Stress is High

It’s perfectly normal to use humor as a way to relieve stress. It doesn’t mean you’re an insensitive clod. The field of neuroscience and psychiatry define two areas of involuntary defense mechanisms as “mature defenses” and “immature” defenses. Humor and sublimation are in the mature defense category, while self-mutiliation, hypochondria, and neurotic behavior are in the immature category.

Laughing in the Face of Death
When my dad died, I recall sitting on the front steps with my sister as the funeral home drove away with his body. We got tickled and sat there laughing over the station wagon they used instead of the hearse we had expected. To an observer, we might have appeared callous and a little crazy. The reality is, we were grieving deeply and laughter was a like a pressure valve in the moment.

Alex Lickerman, M.D. in Psychology Today states; “perhaps laughter could be most properly considered as a weapon against suffering and despair. If we can joke about a disappointing or traumatic event, we’ll often find ourselves feeling that what’s happened to us isn’t so bad and that we’ll be able to get through it. This expectation serves two vitally important functions: 1) It diminishes or even eliminates the moment-by-moment suffering we might otherwise experience as a result of a traumatic loss, which 2) Actually makes it more likely we will make it through a trauma unmarred and flourish once again”.

If you could eavesdrop on the wisecracks and humor when first-responders, military personnel, emergency room staff, and law enforcement are talking among themselves – you might be appalled at their seeming insensitivity. It’s simply a healthy way they process the stress they deal with daily.

Resilience is the ability to recover following stress, unexpected change, or trauma. Laughter can be good therapy as we find our way in a world full of suffering. It’s part of developing resilience. Writing is good therapy too. That’s my excuse for taking time out to type a blog when I should be preparing for Irma. I am coping. Maybe tomorrow I can laugh.

2 thoughts on “Why We Laugh When Stress is High”