During a recent leadership session with a team of smart, motivated, self-aware individuals, there was a lively discussion on how to crush fear and become more courageous. It was agreed that a vital component is building up one’s faith. Since activation is key for this group, the next question was, “How exactly, do you build faith?” Undoubtedly, it’s a process.

“The details of our hard may be different, but all our need for courage is the same”, writes Ann Voskamp. The poetic words from the ancient book of Hebrews describe faith as “the substance of things hoped for; the evidence of things not seen”. That’s beautiful but what does it mean? We live in a world where we want to see results.

Valiant warriors of old like Caleb, King David, Moses, and wise King Solomon clearly conveyed their need for the vital skill of “going out and coming in”. A study of this topic indicates they were referring to the critical ability to function as an overcomer on the daily battlefield. They needed wisdom and discernment to seek higher counsel when they suffered defeat. In addition, they knew  they needed the humility to give honor to God and the faithful ones who came alongside them in battle if they were able to come in as the victorious conqueror.

Life is a series of battles and there’s no escape from the battlefield. There are seasons of rest, but as long as we have breath, there will be battles to fight. Leaders have to show up and not give up. We have to find a way – not walk away.

One way to look at the many facets of faith is with this acronym: 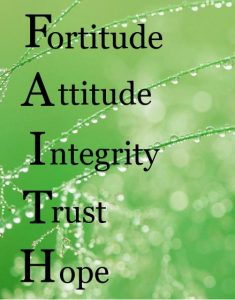 Fortitude is a steadiness of will in doing good in spite of difficulties faced. Those with fortitude have a strength of spirit and the ability to make firm commitments and follow through, even at great cost. Fortitude is developed through experience – the hardest of all teachers.

“Attitude is the little thing that makes a big difference”, according to Winston Churchill. There is also great wisdom in Churchill’s observation, “A pessimist sees the difficulty in every opportunity. An optimist sees the opportunity in every difficulty.” The field of positive psychology has yielded scientific research that provides statistical validation for truths that have been recognized for centuries. Shawn Achor’s research shows that when your brain is in a positive mode, you are 31% more productive than we you are negative, neutral or stressed. You are smarter, more motivated and thus more successful when you are working from a place of happiness and positivity.

Integrity is the single most important component of leadership. It is said that if you have integrity, nothing else matters. And if you don’t have integrity, nothing else matters.Webster’s Dictionary defines integity as adherence to a code of moral, artistic or other values or the quality or state of being complete or undivided. We need more leaders in all areas of society who are firmly anchored in core values that provide an uncompromised moral compass.

Trust is a cornerstone of faith. In team-building, we work on creating an atmosphere of trust and respect. These things are foundational to effective communication. Who do you trust unconditionally? Most of us don’t even trust ourselves unconditionally. The reality is, all of us have let ourselves and others down. Self-sufficiency is glamorized in our culture. There’s a key difference between confidence in self-sufficiency. Wise leaders utilize accountability – knowing they are not infallible. Personally, I trust a leader who puts their trust in God – the only faultless leader. When God is the source – everything that is trustworthy flows from Him. Bold faith stands on the shoulders of quiet trust.

Then there’s Hope. Hope is the anchor for the soul and the oxygen of the spirit. There is no such thing as a hopeless situation, though there are many who lose hope in the face of desperate situations. Leaders are dealers in hope.

FAITH is not made of star dust. I’ve seen my share of shooting star leadership. Those who come and go but don’t have staying power to finish well don’t take the time to develop the qualities outlined above. When I was in leadership with a large national company, there were always those on the annual awards stage who had done phenomenally well. They were in the spotlight because they had smashed sales records and achieved impressive results. Too often, they disappeared after that. Poof – never heard from again. Sometimes, I would hear whispers about character flaws that had taken them under. I never wanted to be in that club. There’s a lot to be said for consistency.

As the calendar turned and this year began, I could see a difficult season ahead. One early morning, during a time of prayer and study, I came upon a note written in the margin of my Bible years ago. It has been a rope I’ve held on to. Faith is the rope, tied to the bucket of reality, dipping into the fullness of God. I’ve come to think of faith as a golden rope. It will hold. May all the circumstances you face in the days and months ahead produce courage, faith, and hope as you see fear crushed under the strength of these attributes. You are an overcomer. And so am I. 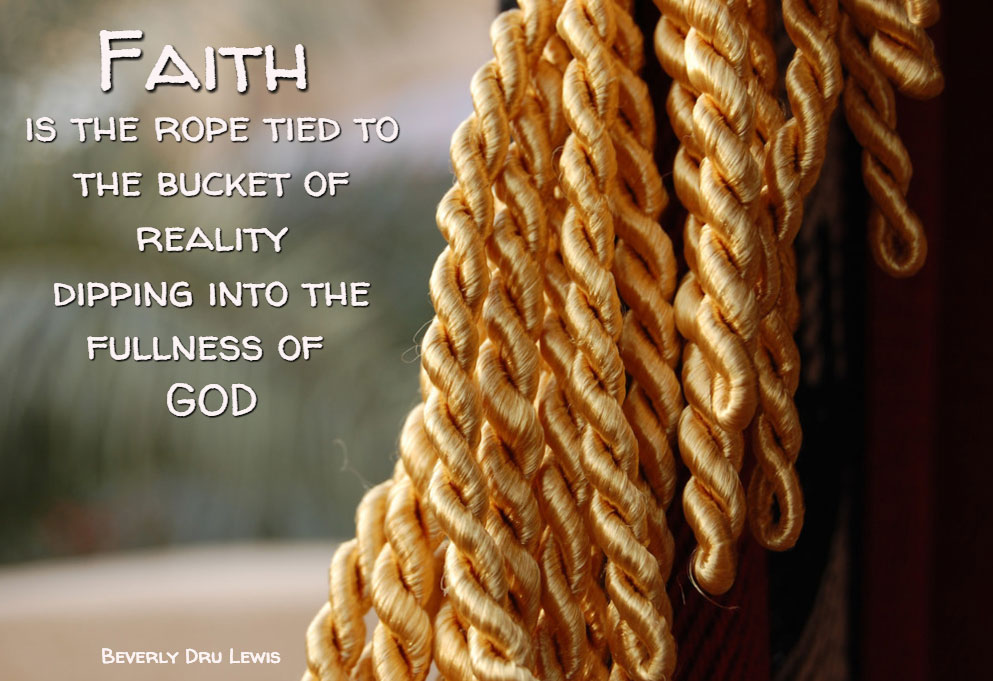