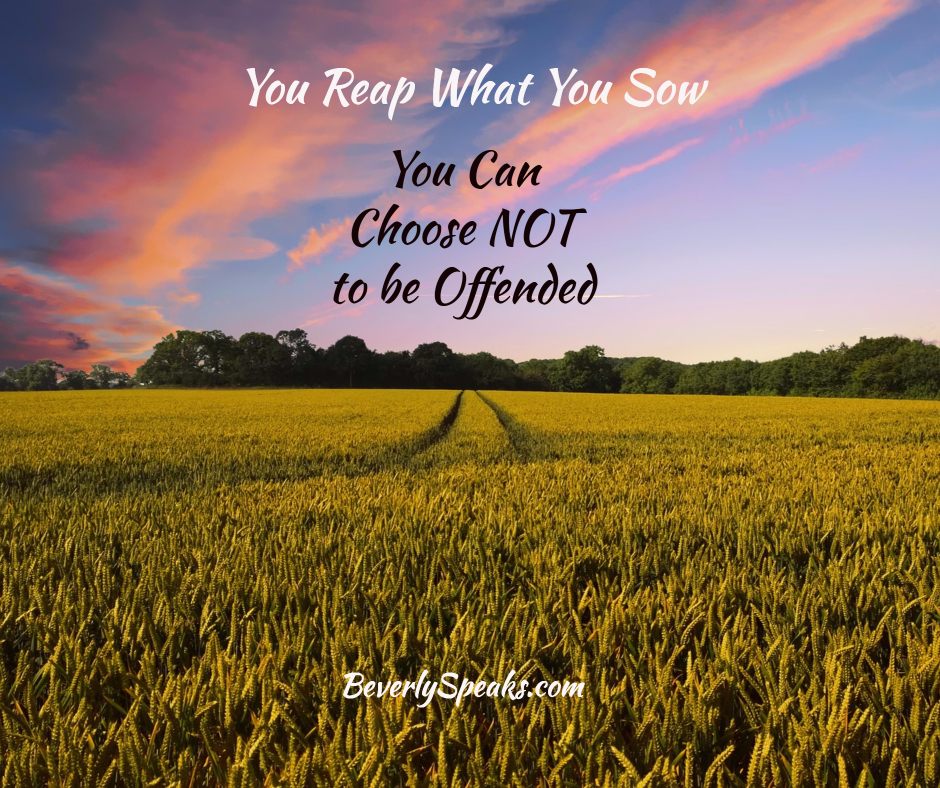 Of all the goals I set this year, becoming unoffendable is probably the grandest. When I mention this goal, the typical response is delivered with a smirk; “How is that working out for you?” Brant Hansen author of Unoffendable points out, “Anger is extraordinarily easy. It’s our default setting.” My personal default setting is happiness but keeping the dial there in a culture filled with strife, violence, and angst is no small feat.

The Internet hasn’t helped the spread of anger. A 2013 study from Beihang University in Bejing found that anger is an emotion that spreads most easily over social media. Joy is a distant second. One of the reasons – we tend to share the happiness only of people we are close to, but we are willing to join the outrage of total strangers.

Consider the people in your world who are easily offended. I bet you didn’t have to think long to come up with a name or two. Whether it’s the person at the office you never want to mention politics to or the person across your dinner table – it seems people’s ability to disagree agreeably has left the building.

The result is a culture that is sick. Time magazine called it the Rage Flu, stating, “Perhaps the only thing we can agree on at this painfully divisive moment in our national history is that all this anger and derision in which we’re marinating isn’t healthy. Not for us, not for our kids and certainly not for the country.”

It is difficult to aspire to optimum health if you don’t even know what it looks like. Do you know anyone who is unoffendable? I’ve had the privilege of watching two people I would call unoffendable and it made a dramatic impression.

One was a woman was married 56 years to a husband who was sick the last 20 years of his life. As he lost his eyesight, his health, and his independence, he became surly and demanding. I never understood why the woman didn’t stand up for herself or snap back in self-defense. It would have been the natural response. But she walked in a grace that demonstrated what unoffendable looks like.

Then there was the gentle woman fighting a losing battle with leukemia. Anger and frustration seemed justifiable, yet she never complained. She had plenty of things she could have been offended by. Instead, she expressed gratitude for the smallest acts of kindness. She focused on literature, music, and the people she loved and smiled through the end of her days.

These unoffendable souls were my grandmothers. The way they lived demonstrated that getting angry, annoyed or offended is not an inevitable “right”. It is not a weakness to resist the impulse to join the ranks of those who rage against unfairness. It’s an incredible strength to stay positive. It requires an internal locus of control.

Psychologists have been talking about locus of control since Julian Rotter coined the term in 1954. An external locus of control indicates someone who believes that they have little control over what happens in life. Circumstances, other people, and even world events buffet them until they feel almost helpless. Those with an internal locus of control are much more likely to take ownership of their own feelings, actions, and behaviors and believe their choices can make all the difference in the outcome. I’ve always referred to these two extremes as the difference between being a thermometer and thermostat. Thermometers react to the environment and reflect it. Thermostats set the environment.

It won’t come as any surprise to know that many studies have linked an internal locus of control to better work performance and higher career satisfaction. But there’s a price to pay. The decision to become unoffendable will require developing the internal qualities of patience, persistence, forgiveness (for yourself and others), along with lavish doses of kindness. Will it be worth it? Only if you want to make a positive difference in the lives of others.

“If you choose to not be offended, then you have taken the first step towards influence.”
– Jeremy Statton

I call the art of not being offended “sitting down on the inside.” When you sit down on the inside, you liberate yourself by letting go of the need to be right. It’s a choice to put down a prideful attitude and listen to another person. Even if they’re wrong. You may feel justified to be offended by someone’s words or actions. You may feel vindicated when you react. But if you’re interested in building enduring relationships, there has to be a better way. I’ve been practicing the art of sitting down on the inside for years and have yet to become a master.

Here’s what this phrase means to me:
• Be the first to reach out and say “I’m sorry”. Make the effort. Forgive – even if the other person is wrong. It takes a big person to build a bridge and repair a breach.

“An offended heart is the breeding ground of deception.”
– John Bevere

• Walk in love. Being right is not as important as it may seem.

“Whenever anyone has offended me, I try to raise my soul so high that the offense cannot reach it.”
-Rene Descartes

• When others are acting frustrated, angry, anxious, or overwhelmed, take a moment to consider where there is a need not being met in this situation. Looking for the unmet need of another is strategic in staying out of a defensive mode.

“At the core of all anger is a need that is not being fulfilled.”
– Dr. Marshall Rosenberg

When we allow ourselves to be offended, we are judging another. We are presuming we know their motives and intentions and it’s highly unlikely we have that figured out. Most of the drama that takes place around us is not about us. We are often advised, “Don’t take it personally”. As soon as we allow ourselves to react on an emotional level, it feels personal. When we become defensive, it’s a sign we have taken the bait and entered a battleground.

Want to join me in the quest to become unoffendable?  You’ll never be the same. And neither will the world.