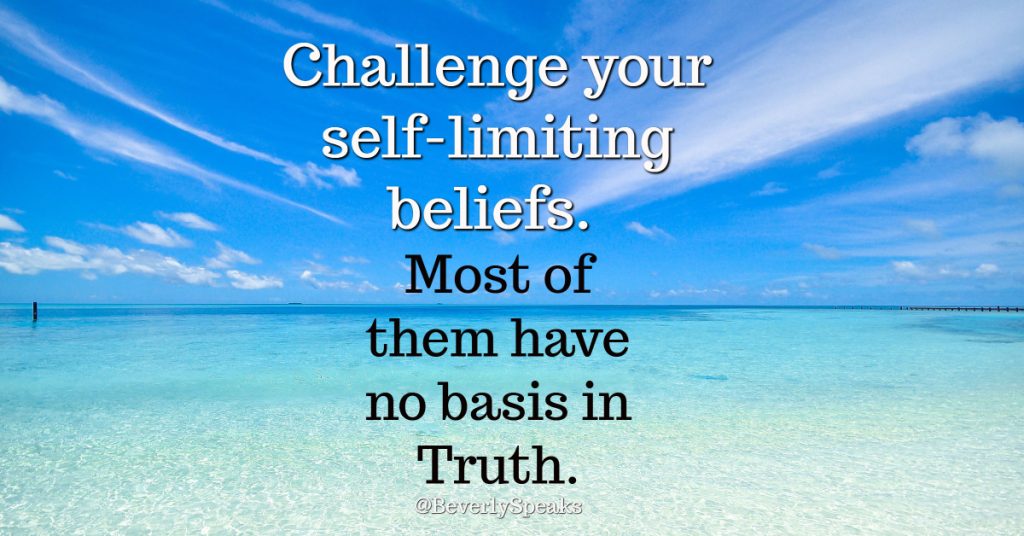 A small incident last week put me face to face with the reality of self-limiting beliefs. It wasn’t a life-changing issue, but it brought to mind the weightier beliefs we all have that don’t serve us well.

Often, they show up in our self-talk. “I could never write a book.” “I’m no good at math.” “I don’t have the leadership skills to run a business.” The way we speak to ourselves can be nauseating – and self-limiting. My issue last week was on the light side. I told the story on my Facebook page in a live video which I re-posted here:

Note: You may need to click the audio icon on the bottom right of the video to hear the message.

Limiting beliefs are like stories we tell ourselves about our lives, and they shape and determine how we view our own identity. All the experiences we’ve ever had and all the conversations we’ve ever heard (or overheard) are recorded in on our sub-conscious. When strong emotion is tied to the memory, the importance it has in your personal archives is emphasized.
The problem with this information? It is not necessarily accurate. It is filtered through our own perceptions. But it has become our own truth.

There’s a well-known story about the way elephants are trained.  Man has a plan to dominate this massive, strong animal.  A baby elephant can be conditioned from infancy to believe it is unable to overpower the constraints of the rope used to confine it. When it’s small, the elephant can not break the rope used to tie it. But it grows into adulthood thinking the constraint is stronger than his own might. In Asian countries where the elephant is still used in farming, the farmers weave their ropes from river reeds. These river reeds effectively restrain animals that weigh from three to six tons. River reed thinking is false beliefs about our abilities and potential that hold us back from fulfilling our destiny.

There is a psychological principle called “belief perseverance”. Also referred to as belief persistence, it is the tendency of individuals to hold on to their beliefs even when they should not. River reed thinking – a memorable description of continuing in core beliefs that keep you stuck.

These beliefs are not necessarily only about yourself. It might be a political belief or your perspective about another race, religion, or people-group. It could pertain to your attitude about money. River reed thinking sets limits and directs our actions from its covert position in our subconscious. With belief persistence, we tend to pay close attention to evidence that reinforces our beliefs. A bigger deterrent to new ideas and perspectives is the internal mechanism that filters out information that contradicts our belief system. No wonder change takes such intentional effort!

It’s easier to play small than to knock down the obstacles and do something extraordinary. It means searching out and stewarding your calling by developing your God-given gifts and talents.

Tony Robbins has impacted hundreds of thousands of people with his “Unleash the Power Within” Seminars. People pay to walk over hot coals – partly to experience the exhilaration that comes when you feel unstoppable. Come to think of it, most people who are unstoppable have walked through a proverbial fire.

When I think of unstoppable people whose convictions I want to emulate, the story of Eric Lidell springs to mind. His story conveys the incredible power that comes to a man when he believes in something greater than himself – and yet also, equally strongly, believes in himself. Lidell was a missionary to China, but he is famous because of his spectacular Gold medal run in the 1924 Olympics. He had trained for the 100 meter race and was favored to win. At the last hour, the day of his race was changed to Sunday, which was a problem because Lidell had a personal rule that he would never run on a Sunday. He decided to run the 400 meter race on Monday. Not his best race. He ran it and set a world record that stood unbroken for decades.

Lidell lived life to the hilt. The only way to do that is to ditch the River Reed thinking and embrace your God-given identity. Lidell said, “God made me fast, and when I run, I feel his pleasure on me.” It’s time shake off the rope of self-limiting beliefs. It’s never to late to run your race.