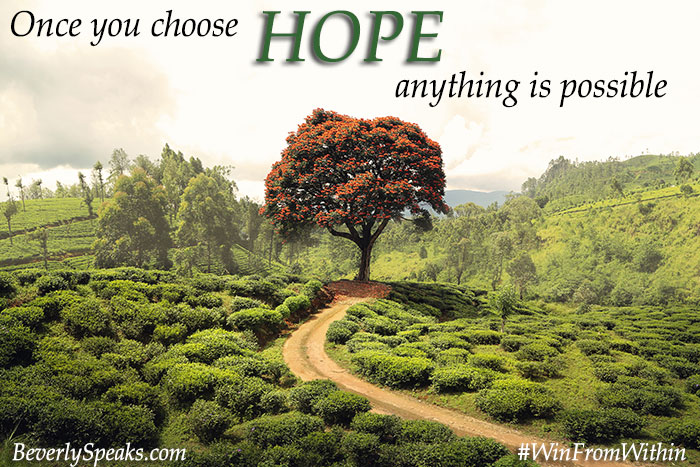 Hope is the light in our lives that powers each day, illuminates the faces of those we love, and gives us vision for our future. It is an essential element of life, yet it can’t be quantified or measured.

Leaders are dealers in hope or they are not true leaders at all. Hope is as essential to the soul as oxygen is to the body. The dictionary defines hope as “desire accompanied by expectation of or belief in fulfillment”.

When I was in high school, I read Man’s Search for Meaning by Viktor Frankl and was profoundly impacted by his experience as an Auschwitz concentration camp inmate. The message in his book convinced me that nothing I would ever go through would compare with his heinous journey. I held on to the idea that if he could sustain hope in the darkest place our world has ever seen, hope is an anchor that could hold me steady all the days of my life. The anchor holds.

There are volumes of research on the power of hope. Some of the most interesting come from the medical field where quantifiable results are the norm. Not surprisingly, study after study reveals that hope is a vital component in the healing process of patients.

Jerome Groopman in The Anatomy of Hope, writes, “Belief and expectation – the key elements of hope – can block pain by releasing the brain’s endorphins and enkephalins, mimicking the effects of morphine. In some cases, hope can also have important effects on fundamental physiological processes like respiration, circulation and motor function.”

Johns Hopkins School of Medicine cardiologist Ilan Wittstein in an NBC interview was asked, ‘Can you die of a broken heart?’ His reply was , “absolutely, yes, you can.” Wittstein has spent years investigating “broken heart syndrome,” which he and colleagues documented in a widely-cited article.

If you find yourself running low on hope, or connected with someone who has lost it, here are well-documented paths for restoring hope. I like to think of these as instructions for re-setting your anchor.

Strengthen your identity –  Everyone has a destiny that is revealed through our gifts, talents, experiences and dreams. The storms of life can cause us to lose sight of the truly important things in our life that make us unique and valuable. Put your eyes on Jeremiah 29:11 – “For I know the plans I have for you, declares the Lord, plans to prosper you and not to harm you, plans to give you a hope and a future.”  Sometimes it is necessary to connect with a coach or mentor – an objective person –  who can help you refocus in this process of strengthening your identity.

Nourish your spiritual man –  It has been many years since I read Man’s Search for Meaning. One thing I’ve discovered is that hope is not a what, it’s a who. I can’t cook up hope with any amount of positive thinking or personal cheerleading. Hope is born in the deep places of the spirit, the part of our being where we we communicate with the one who created us. God Himself is the author of faith, and thus the giver of hope. Seek Him and you will find Hope.

Cultivate healthy relationships – The natural tendency of someone running low on hope is to isolate themselves. That’s actually the worst possible response, as nothing is more crucial to restoring hope than holding on to the people around us. When we make positive connections with other people, the pleasure-inducing hormone oxytocin is released into our bloodstream. This immediately acts to reduce anxiety and over time, social connections bolster the cardiovascular, neuroendocrine and immune systems. The Harvard Men Study  – one of the longest-running studies of all time – concluded that our relationships with other people matter, and matter more than anything else in the world.

Claim power by taking action – Losing hope can be equated to getting hit so hard you get the breath knocked out of you. I remember falling out of a tree as a kid – lying on the ground looking up at leaves, feeling totally panicked that I couldn’t breathe. The difference between kids and adults is a child will clamber right back up into the tree. The adult doesn’t recover quite so fast. But action is good medicine. 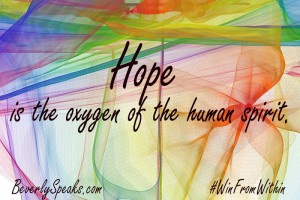 There is a profound difference between hoping and wishing. Wishing is passive and hope is active. Wishing is having a fantasy that everything will be alright. Hope involves intentional initiatives that move you forward. Get up and get moving.

Ban negative talk – One of my dad’s favorite sayings was, “if you don’t have anything nice to say, don’t say anything at all. Sharing pain can be therapeutic. Then there’s that point where repeating the story rehearses the pain over and over again. By speaking out loud what is good and what you are thankful for, you can begin to shift your perspective.

Give to others – Research supports what we have all experienced – doing good for others has a boomerang effect. The giver often receives more than the receiver. Harvard Business School professor Michael Norton found in a 2008 study that giving money to someone else lifted participants’ happiness more that spending it on themselves (despite participants’ prediction that spending on themselves would make them happier). Happiness expert Sonja Lyubomirsky, a professor of psychology at the University of California, saw similar results when she asked people to perform five acts of kindness each week for six weeks.

Sing –  Music therapy is an available major in colleges because of the mountains of data supporting the healing power of music. “We’ve found compelling evidence that musical interventions can play a health-care role in settings ranging from operating rooms to family clinics,” says Levitin, author of the book This is Your Brain on Music. Sing to yourself – sing songs of hope.