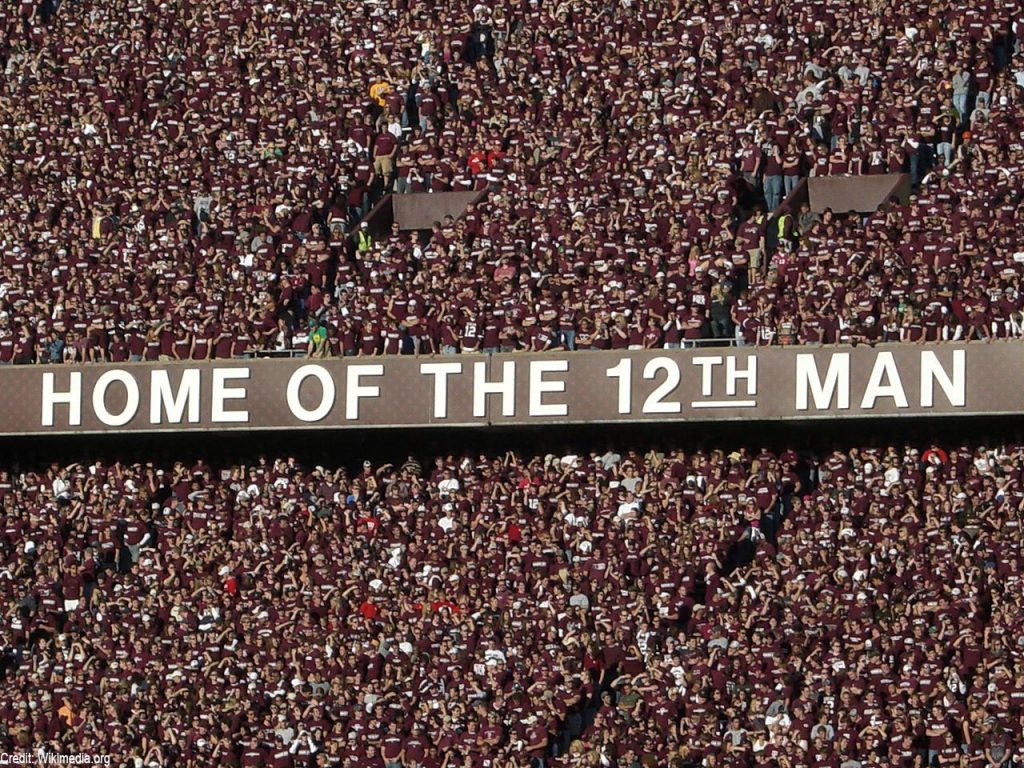 Texas  A & M football wasn’t on my radar until recently. This team isn’t in the Southeastern Conference, so I can’t tell you what their ranking is or if they are playing in a bowl game. It was a remarkable game in another era that captured my attention – the one that led to the tradition of the Twelfth Man. It is  commemorated every home game when the fans stand throughout the entire game.

The legend was born in 1922 during a game between two arch rivals. Texas A & M players suffered so many injuries during the first half, Coach Dana Bible wasn’t sure he would have enough players to finish the game. He asked a young man in the press box, E. King Gill, to suit up and be on stand-by in case he was needed to maintain the required eleven players on the field.

Gill put on the uniform of one of the injured players and stood on the sideline, ready to aid the Aggies if needed. Though he never got into the game, his presence contributed to the fantastic win that was reported as “the most spectacular, most nerve-tingling football game ever staged in the history of the game in the southwest.” The entire A&M student body is now known as the 12th Man, standing during the entire game to show their support and waiting to be called upon if needed.

The Key to Taking on the Impossible

Feeling the support of others and having the encouragement of people who believe in you is a game-changer. Sometimes you can talk to those people and absorb their reassuring tones when your confidence is shaken or you simply need the warmth of someone who understands and cares about you.

But what do you do when it seems all those people have vanished from your life? Some have died, in other cases seasons changed and your lives have grown apart, or maybe you changed jobs and your favorite boss of all time didn’t.  But you can raise the torch that was passed to you and run with the legacy of those who have paved the way for you.

I’ve always loved the book of Hebrews in the Bible. Chapter 11 is known as the “Hall of Faith”, describing remarkable people who accomplished incredible things in life. Chapter 12 starts out by describing a spiritual “Twelfth Man”. The Message reads, “Do you see what this means—all these pioneers who blazed the way, all these veterans cheering us on? It means we’d better get on with it. Strip down, start running—and never quit!”

Many people are sucked into sadness when they consider the absence of those who have been mentors, parents, friends, and encouragers. Those who have brought love into our lives leave an indelible imprint. We learn from the message in Hebrews that the best response is to take up the mantle of the legacy they left and carry it to the next person.

Recently, I attended a Celebration of Life Service for a precious friend who moved to heaven. It was actually an uplifting experience with the focus on the joy of a life well-lived. (Note to my family – I want mine to be that way!) I was impressed by what she had clearly and intentionally spoken repeatedly into the lives of her 11 grandchildren who were there to tell stories of her influence. She told each one, “you were born for the impossible”.  That energized me and prompted me to refer back to an email she sent me earlier in the year exhorting me to attempt that which seems impossible. She was encouraging me to grow, to stretch, to reach higher and believe for greater things ahead. 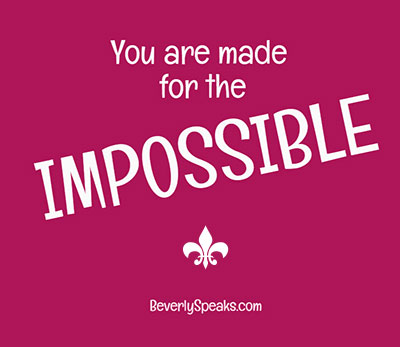 I miss my friend- just as  I will always miss my dad, my grandmothers, and so many others whom I loved deeply and now make up the “great cloud of witnesses” cheering me on. I might not hear their cheers with my ears, but I can strengthen my heart by reflecting on what I inherited from them. I can fix my mind on what I’ve gained, rather than what I’ve lost. I can pour my knowledge, gifts, and experience into encouraging others the way I have been encouraged. Successful, happy people have vision, faith and hope – where others have negativity, fear, pessimism and doubt.

We all have a twelfth man, standing in the grandstand of our life.  Let that knowledge strengthen your resolve to persevere and give your best to all you do. You are made for the impossible. Let it be said of us when we’ve finished that it was a spectacular, spine-tingling life. Game on.