Jim Carrey’s hilarious portrayal of the Grinch elevated the status of a classic Christmas story to the top three of my favorite holiday movies. But if you don’t have green fur – rants, complaints, and offensive behavior don’t bode well for your relationships. Cindy Lou Who was extraordinarily patient and resistant to insults  – not characteristics you’re likely to find in your co-workers and family members.

Are you Becoming a Grinch?

Are you depressing yourself and everyone around you by focusing on the negative? With the upcoming holidays, many of us will find ourselves across the table from people who have offended us. In the middle of this muddled mess, you can bring healing and reconciliation. You will never regret it.

Last year, in a post titled, Courage Doesn’t Always Roar, I talked about Courageous and Angry being two entirely different animals . They are not really related at all, but in recent weeks, the line seems to have blurred between the two. Anger has been rampant and people rant and put down others – all in the guise of being honest.  Most of us witnessed the train wreck of relationships on social media and elsewhere during the recent election. Some call it freedom of speech. Psychologists say it resulted in a new malady and dubbed it “Election Stress Disorder”.

Justifiably, there’s deep concern and outrage over what seems to be a rise in racism, violence, corruption and lies. The news has delivered a steady stream of horrifying headlines. We all want to be informed, but when the news lives in your head and the dissonance of the world takes residence in your heart, you aren’t good company for yourself – much less others. Continually rehashing bad news and allowing it to inflame you is a prescription for depression.

The Power of Our Words

The power of our words to shape our world is a timeless principle.  The tongue has been compared to the rudder of a ship – a small part that can steer your life. It’s also been noted it holds the same potential as a spark that can set off a devastating forest fire. Words literally direct the course of your life. So what kind of life are you designing with your conversation?

Take Negative Thoughts Captive Before You Give Them Power

Sometimes it’s difficult to capture negative thoughts and stop them from galloping through your head, but it’s essential if you want peace of mind along with healthy relationships. When we feed our negative thoughts by  vocalizing them,  the person who suffers first is you. Think about the last time you vented to someone. Did you feel better afterward?  What about the last time you were on the listening end of someone’s diatribe. How did it make you feel? I’m pretty sure venting gives us a way to rehearse the problem rather than disperse the problem. It solves nothing – there are far more productive ways to process frustration. (Check out the webinar below.)

Courageous communication is central to success. “How so?”, you might ask. It’s a key component of quality relationships.  And lasting relationships are the secret to happiness. Don’t take my word for it – look at the Harvard Life Study. It is the longest research study ever conducted – lasting for  75 years at the cost of about 2.5 million dollars. The conclusion is that loving relationships are ultimately far more important to happiness than income, education, fame, power or even health.

I always love it when scientific reports research as if it’s breakthrough information when centuries-old wisdom has been saying the same thing all along.

Courageous communication is a foundation stone of my leadership coaching and involves discipline, respect, and courtesy as much as it addresses honest articulation of important issues. William Ury, author of The Third Side, advises “When you listen to someone, it is the most profound act of human respect.”  It often takes more effort to listen than to talk.  A worthy goal in the weeks ahead is to show respect even to people who don’t deserve it. Not as a reflection of their character, but as a reflection of yours. 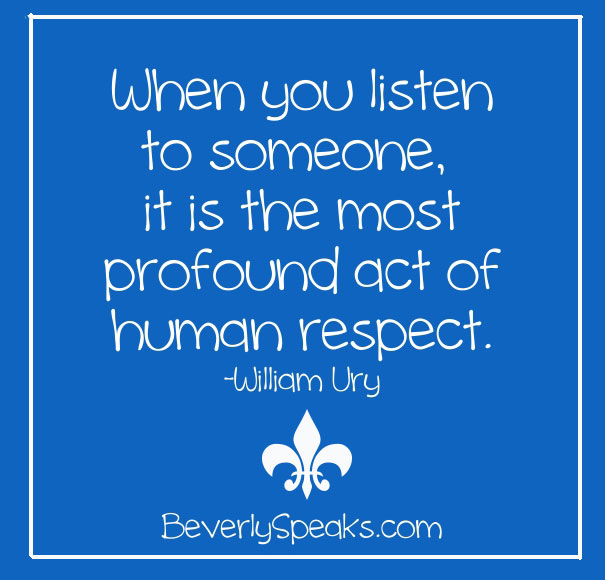 If you’ve been mired in negativity, it’s time to retrain your brain. Neurologists say every time you resist acting on your anger and choose to restore yourself to calm, you are rewiring your brain to be calmer and more loving. The startling truth is you have a choice between being stressed out or being calm.

Choosing to think about what’s going right in your world instead of focusing on what’s wrong can change your mood and your attitude. Look for a reason to smile.  What activities make you happy? Set a goal to do some of your favorite things and give into the feelings of anticipation.  A study published by American Physiological Society revealed that people who just thought about watching their favorite movie increased their endorphin levels by 27%. Endorphins are the substance released by the brain that help relieve pain and induce feelings of pleasure.

The next step is to start to speak words of life. Start with gratitude. Begin to give voice to the things you are thankful for.

In a  webinar on the subject “Courage Doesn’t Always Roar”, I offer five specific strategies that can help relieve anger and redirect your thinking. If you could use an attitude adjustment going forward, I am offering you access to the replay HERE.

My wish for you in the weeks ahead is that you will experience hope, peace and a healthy dose of joy. Unless you want to sport a green suit, leave the role of the Grinch to Jim Carrey who artfully makes it a laughing matter.

2 thoughts on “Are You Becoming A Grinch?”