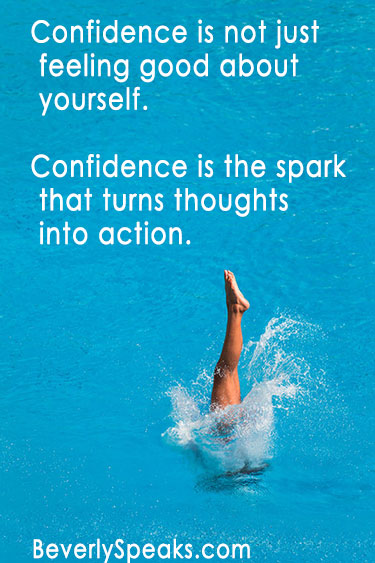 As I grabbed a stool to access a high cabinet the other day, I started thinking how handy that small piece of furniture is when I need a boost. In this case, I was able to step up and reach an object on a shelf that was beyond my reach. That simple act got me thinking about how critical a boost in our self-confidence can be. Sometimes, the smallest thing can give us just enough lift to see more clearly, make better decisions and be more effective.

Did you know that in the United States, women are reaching new heights and earning more college and graduate degrees than men? We make up half the workforce, and we are closing the gap in middle management. Yet our career trajectories continue to look drastically different than those of men. Men continue to get promoted faster and be paid more than women. Research studies have proliferated as this phenomenon has been observed.

The frustrating fact is that evidence shows that women are less self-assured than men—and that to succeed, confidence matters as much as competence.

The shortfall in female confidence is increasingly studied and well documented. In 2011, the Institute of Leadership and Management, in the United Kingdom, surveyed British managers about how confident they feel in their professions. Half the female respondents reported self-doubt about their job performance and careers, compared with fewer than a third of male respondents.

Cameron Anderson, a psychologist at the University of California at Berkeley, has made a career of studying overconfidence. Among his fascinating findings is the revelation that women applied for a promotion only when they met 100 percent of the qualifications. Men applied when they met 50 percent.

Zachary Estes, a research psychologist in Milan conducted a series of tests that proved the natural result of low confidence is inaction. Not surprisingly, women missed many opportunities through not applying – not trying.

Rather than belabor the point of how a clear gap in confidence is affecting the performance of women in the marketplace, I’m going to pull out my stool and offer a hand in helping women step up. In fact, it is certain that to become more confident, women need to stop thinking so much and just act.

The good news, is you can train your brain to be more confidence-prone. Neuro-science is able to document what I’ve always known on a deep level. Every single one of us is capable of more than we realize. The possibilities are staggering.

Here’s a simple, practical action you can take right now. Register for the Free Tele-Conference on May 20th- Bridging the Confidence Gap. Registrants will receive access to the recorded call.

2 thoughts on “The Confidence Gap”